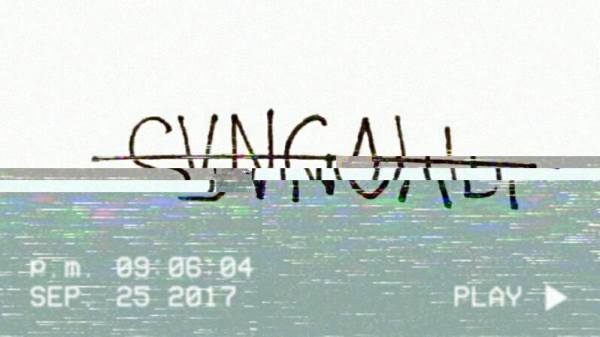 I caught up with Mercury, one of the members of this exciting new group, SVNGALI to find out a little bit more about them and their music…

They are a three piece experimental English band with members: Mercury as the guitarist, keyboardist, as well as working on the production and recording. Singer, rapper, and bassist Matty. Also, art director and drummer Maz.

SVNGALI started out as a two piece band in 2015, under the name ‘Svengali’ before disbanding in 2016 leaving Mercury as a solo artist. In 2017, Mercury recruited Maz as an art manager, and later asked Matty to record and guest vocals, but both ended up becoming full time members.

How did you come up with your band name?

“SVNGALI is a stylised version of ‘Svengali’ which is a character from the novel ‘Trilby’, who controls musicians to give them talent in return for essentially their souls.”

What made you want to start making music?

“I’ve been wanting to make music since I was about 13. I’ve been in and out of bands my entire life, but I’ve never really clicked with any of the members the way I do with these guys.

“The exact moment I knew what I wanted to do was in 2010 when I saw the music video for Slipknot’s ‘Psychosocial’ and I discovered metal music for the first time. The other members had a more casual interest in becoming musicians.

“We started talking about forming a and when I heard Matty talking about how he wanted to start buying equipment and I offered him usage of my home studio. After that we just kept working together.”

Are there any musicians that are your icons or influenced your music?

“The current album is heavily inspired by ‘Hollywood Undead’, ‘Blackbear’, but we also have a single coming out that draws heavy inspiration from ‘Gojira’ and ‘Slipknot’. We have a very wide range of influences from indie, to hip hop, to heavy metal and we want to put all of that across in our music.”

How would you describe your music?

“Well :mainframeghost: which is our first EP is a concept album about a God who is trying to invent life, but when they actually succeed humanity stops believing in them. The God had to decide whether to destroy them or let it happen. 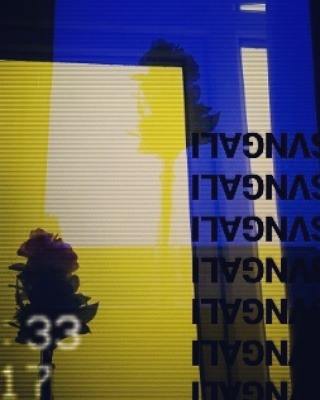 Is there anything you do to help rejuvenate your creativity?

“I’m in film school and have produced an award winning documentary. Matty acts and makes films too, and Maz is a photographer who prints and sells her work. We also all really enjoy video games and me and Matty both skate. We tend to spend our time together going on ‘adventures’, watching Netflix, listening to music and going to gigs.”

Is there anywhere you would have performed or would like to perform?

“We haven’t started plying gigs yet, but my absolute dream would be to play at Download Festival with a set made of some of our heavier songs. We’d also love to play alongside some of the acts that have inspired us – opening for them or being on the same stage at a festival is the dream.”

Which of your songs are your favourite or you would recommend people listen to first?

“Pry ft Hungry Lights is going to be a fan favourite, we can already tell. And idontwant2bhere is our current favourite off the album.”

What are your greatest challenges?

“Challenges have really been getting around the fact that I’ve moved away from Middlesbrough. I’m the one with the studio, so I’ve been producing all the songs, but it’s been a problem when it comes to writing and recording vocals. We’ve had a few technical difficulties…such as my computer screen blowing up while I was trying to record – it was terrifying!”

What are your plans for the future?

“We have plans to release an EP in February 2018, a music video in March, a second EP later in the same year and a cover at some point.

“In the long run we intend to release many full length albums, play gigs, and release merchandise. We really just want to grow our fanbase to the point that we are able to do this full time.”

“When the EP comes out, it will initially be on Bandcamp and after a few weeks it’ll be available on YouTube, iTunes and Spotify – all the usual places to go for music.”

Is there anything else you would like people to know about your band?

“Well Matty will definitely want me to plug his Twitter page, it’s ‘@MattyTehKid.

“Also, would like to credit the main people that have helped me a lot, Hungry Lights (Justin Bonitz) and Miracle of Sound (Gavin Dunne), who are both established musicians who have been gicing me little bits of advice and generally supported me.

“Also, I’m doing a few remixes for other bands, which all revenue from will go to a currently undecided charity.”

You can listen to the instrumentals of ‘Parable’ and ‘idontwant2bhere’ from SVNGALI’s upcoming debut EP :mainframeghost: HERE. 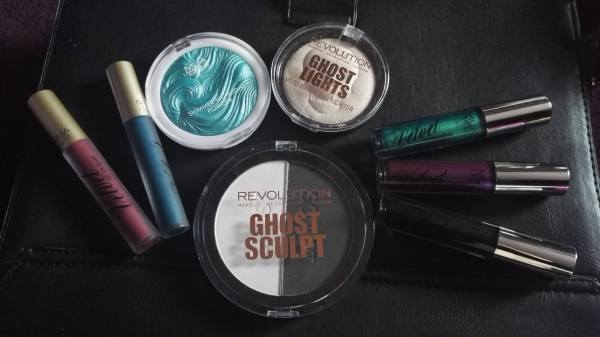 So I was intending to save up my student loan and not go on a spending spree, but with the Halloween period being the best time to buy all-things goth, I couldn’t help myself.

I figured why not treat myself – my excuse being that October is ‘Gothmas’.

Every year I get so excited by the vast array of creepy and dark decor, make-up, clothing and jewellery all round the shops.

Honestly this year I was a little disappointed, as I didn’t see many items of clothing around, I at least expected a couple of Primark t-shirts, alas there were none.

I did, however, manage bag myself a couple of pieces of jewellery which I will happily show off in another post.

I think the most interesting Halloween items this year were TK Maxx’s home decor. But with me not being a home owner yet, there was little I could purchase. But I did get some great inspiration for when I do get my own place in future, for now I’ve just stuck to getting a few candles for my bedroom.

As you can imagine, I get pretty excited whenever I find the Halloween section in a store.

So I went in Superdrug, after purchasing ‘MUA Luxe Velvet Lip Lacquer – Panache’, only intending to buy another one of these matte liquid lipsticks, but in the shade ‘Splash’.

However I came out with 6 other make-up products.

I was freaking out when I found a Halloween make-up section and had to persuade myself to only buy a few of the items and not the whole lot.

So without further ado, here are the products I bought and my first impression:

I bought these liquid lipsticks in three different shades to try out: Purple, Green and Black. I loved the way they were shimmery and glittery in the light. They aren’t your everyday wearable colours, but I wanted something bold that I could get creative with. I did try these on my lips to test them out, but not for a prolonged period. I found that the green one was particularly more drying the the others on the lip. So far all the liquid lipsticks I have tried (not just this brand) seem uncomfortable for me. It might just be because I tend to be more of a lip-balm kind of girl, so I hate that dried up feeling. It’s going to have to be something where I test out other brands to see if I find one comfortable enough.

Obviously these are cheaper drug store brands, so I wasn’t expecting anything amazing. I was very impressed with the colours, however I found the metallic colours crumble away more on the inside of the lip than the plain matte ones I had previously tried. However, when it comes to washing them off, I used a baby-wipe and found that previously the matte versions of Panache and Splash wiped off pretty easily, whereas the metallic shades take a lot more scrubbing.

I’m pretty happy with these colours however, I don’t think these are something I will be wearing regularly on my lips. My plan for these is to do some more creative artsy eye looks with them, because they only tend to crumble on the lips. If you don’t know what I’m talking about then you should check out Drac Maken’s YouTube channel. She regularly uses liquid lipsticks for her eye art pieces and they always turn out amazing. 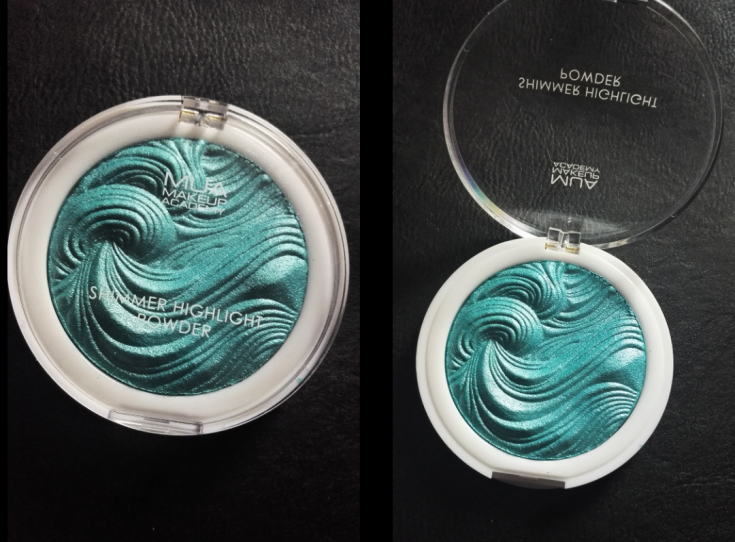 I already own two MUA highlighters and I’ve been pretty impressed with their quality for the price, so I thought I’d get a new one. This time I went for this really bold metallic blue colour. Again, this is not something wearable for everyday, but will definitely come in handy for some more creative looks or even as an eye-shadow.  It has a good pigment and definitely highlights as the shimmer to this really stands out. Their highlighters are definitely something I would recommend if you are looking for some good quality, but cheap drugstore brands.

This has got to be my favourite make-up purchases. I love everything about this product! First of all, the skull print within the powder got me so excited – it’s so cute I almost didn’t want to touch it in case I ruined it. At first glance it looks like a white base with gold tint to it. However, when applied to the cheeks and viewed in the light you can see these stunning pink shimmers. It’s the perfect glow for any ghoul! The pigment has just the right balance, not too pale that you have to apply loads and not too strong that you look like an instant ball of light. I have been using this as my everyday highlighter since and I’m still really impressed with it. 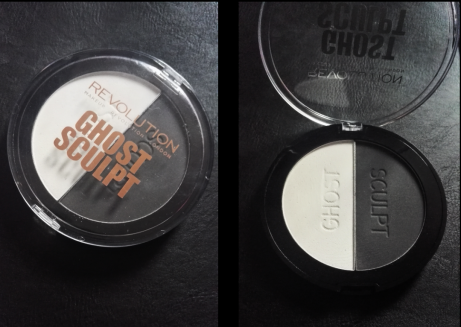 This is a product I got super excited about when I first saw it. I’m already really pale in complexion, so I find that when I buy contour palettes they always look too orange-toned for my skin and don’t look right. I took to trying to use black eye-shadows to create a light grey contour, however this was never easy when the eye-shadow palettes were so small and highly pigmented. So when I found this I knew I had to try it out.

When it comes to the white-powder side I wasn’t that impressed. I was hoping it would work well as a highlight or at least make my face more ghostly white, however, I found it just blends into my natural skin tone (granted this could be because I’m already as white as a sheet!). However, if you are looking for a good translucent powder this would be it.

When it came to the black-powder side, I applied it way too heavy! This product has some strong pigment, so I’d say use it carefully otherwise the contour can end up looking way too dark. Obviously this was intended for dramatic Halloween looks. I’m pretty happy with this product and again I use this as my everyday contour, it’s just something I find I have to be very careful over how much product is on the brush and do a lot of blending to make it look natural. I will be continuing to use this though and would buy it again. If you was those heavily contoured cheekbones, this will definitely do the trick.

So that’s all the makeup I got in October. I hope everyone had an awesome Halloween, let me know what you did to celebrate or any of your spooky finds in the comments.